My two newest paintings, finished this spring. Barns painted in a winter scape and a summer scape. Both are oil on canvas. 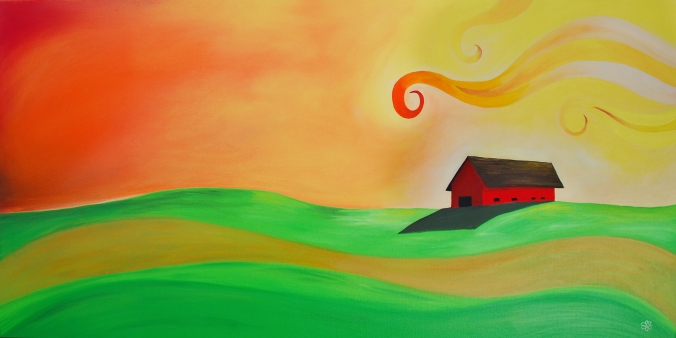 Finally finished this, started it over a year ago but it got stored away when we moved. 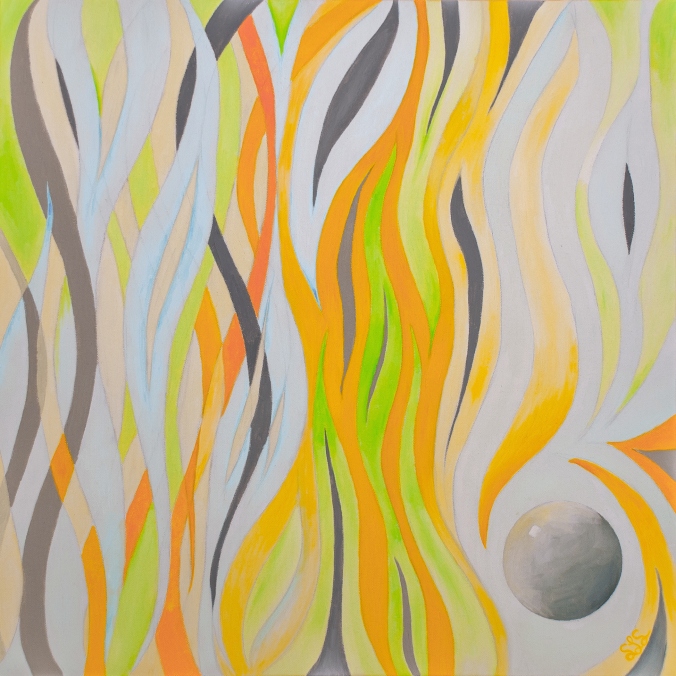 In honor of National Dog Day I want to share some great photos that Ken took of me and our beloved pup dog Rhythm.

What is that look? She needs a bubble caption.

I just finished listening to an audio book this week called A Million Miles In A Thousand Years: What I Learned While Editing My Life by Donald Miller. I wasn’t sure what to expect but I ended up loving it.. I am an avid reader and a wishful writer, meaning I wish I were a writer. So, I totally get the premise of what he is saying. He is a writer that wrote a book about his life and some movie producers wanted to make a movie about the book but it turned out his life was not really movie material, in fact it was very boring so they started changing and editing everything about it (in the book). It made Don take a different look at his real life though and decide to live it like a good story. He challenged himself by putting himself in situations that require more effort and sacrifice than he would typically feel comfortable exerting. He goes from being overweight and sleeping all day to hiking the Inca Trail in Peru and riding his bike across America, from wasting his money on stupid material things to founding a nonprofit that helps kids.

The essence of a story is – A character who wants something and overcomes conflict to get it. The bigger the conflict the better the story.  Also, the point of a story is the character transformation. How the character changed for the better to overcomes his fears, etc. A good story also involves others, helping others, changing something for the better or doing something that will be remembered. Just because you get a better job and buy a new car doesn’t make it a good story. If you get a better job and use your money to build an orphanage, that makes a better story.  A good story also has memorable scenes. Remember that dinner you had three years ago? Me either. Remember watching the sunset in White Sands, NM? Of Course!!

Our current story: Two middle age, middle class, stuck in blah jobs that spend their spare time vacuuming and mowing the grass…not a good story. A trip to Paris? Better…at least there are good memories but really it is just a good vacation, not really a life story. What do we want to be remembered for? “If you aren’t telling a good story, nobody thinks you died too soon; they just think you died.” Quote from book.

Life can’t be written in black and white like a book, things change and happen that we do not have control over but that just makes for a nice plot twist that we have to work with.

Let’s start making great memories and great stories with our lives. Everyday we have a choice to make a great memory.

My oil painting Mother Earth was sold this month on the website http://www.artsyhome.com. She now has a new home in California. I haven’t sold a piece in a while and haven’t painted in a while. Maybe this will give me some motivation to get back in the studio. 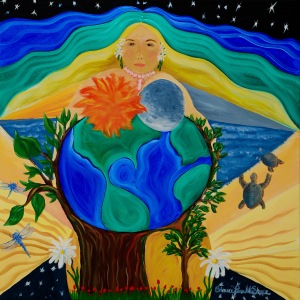 My mom finally decided to clean out my childhood bedroom and do some remodeling, 20+ years after I moved out (good for her and about time). But that meant there was a lot of my old stuff I had to figure out what to do with, including a lot of art work. I have no use for it but it is a big part of my history and I can’t throw it out. Granted a lot of it was worthy of the trash can but the best of it I spent time going through, taking a few pictures and then boxed it up to spend the next 20+ years in my attic. Most of this batch was from high school and freshman/sophomore college…I think. My mom says she found several more portfolios that are probably later college. It was interesting for me to see how some of my drawings that I did close to 25 years ago have a very similar style to the work I still do now. Some of it I remember doing very clearly, the class, the assignment, the teacher, all the memories coming back. Some pieces I have very little or no memory of. It was a fun trip down memory lane though. 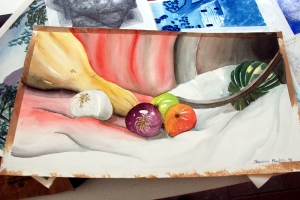 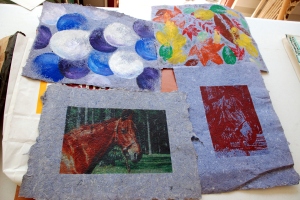 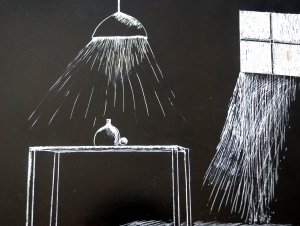 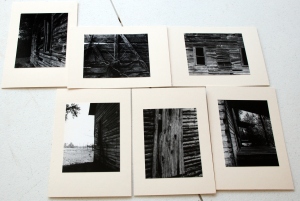 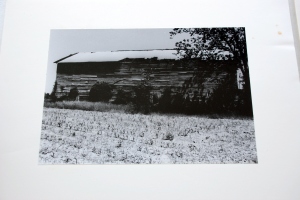 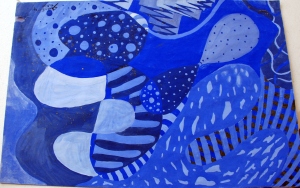 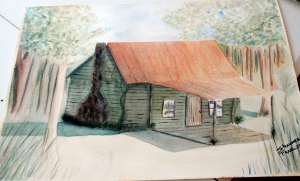 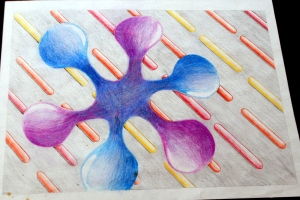 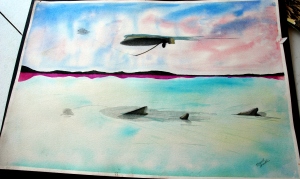 Spring is almost here…but not yet. We had a beautiful warm winter day and I had a hankering to start working in my flower beds. Not yet though, there are still freezes to come. So, instead I painted some flowers to brighten my day. This was the first time I have picked up a paint brush in probably 6 months.  Not my most awesome work but at least it got me back in the studio.  It is an oil on wood, my favorite medium. 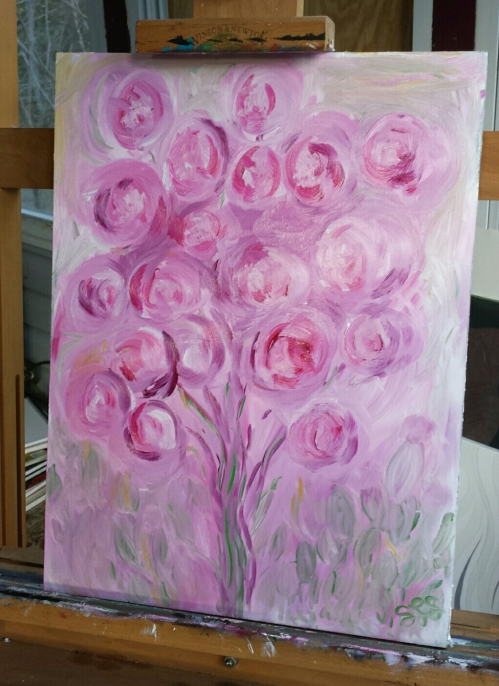 Whenever Ken plays the harmonica Rhythm sings the blues. Just had to share.

Start with a beautiful winter day spent tooling around St. Marks Wildlife Refuge followed by an evening of fun with IMovie on the Mac and Voila! Our very own movie trailer. This isn’t for an actual movie, it’s just a fun trailer we made using videos from some of the days hike.

We took Rhythm to a Snake Avoidance Clinic last Sunday in Alachua, FL, just 20 miles north of Gainesville. It was sponsored by the Tampa Bay Vizsla Club and Dr. Bud Calderwood DMD was the trainer. 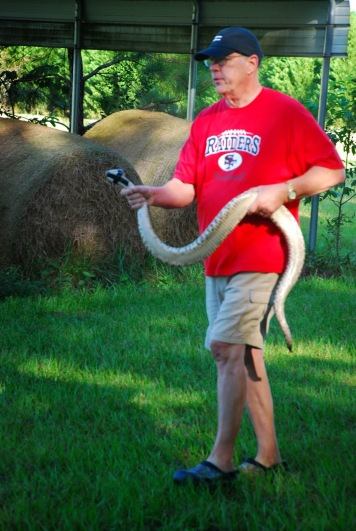 Snake avoidance training teaches the dog to fear and avoid poisonous snakes. They used a real live rattlesnake and cotton mouth, the two most common poisonous snakes in our area. Different snakes have different smells so that’s why they use the two kinds and not just one. They are de-fanged and their mouths are taped shut for extra safety.


It is very common for hunting dogs to be “snake proofed” as they call it because they are out in the woods so much but it is a good idea for any dog that lives in an area like North Florida that has a lot of snakes. We’ve had four dogs get bitten by cotton mouths over the years at the farm, only one survived after $1000 in vet bills. So, it was very important that Rhythm do this.


They use shock collars set very high, but Dr. Calderwood is in control and knows just how to do it so the dog only gets shocked twice.

The handler or owner puts the dog on a very long line and lets the dog roam on their own and discover the snake in the grass. The “snake handlers” stand by with brooms in case the snake tries to make an escape. Dr. Calderwood is standing a little ways off on the other side of the dog and handler and when the dog goes up to the snake to check it out they get hit with a hard shock. 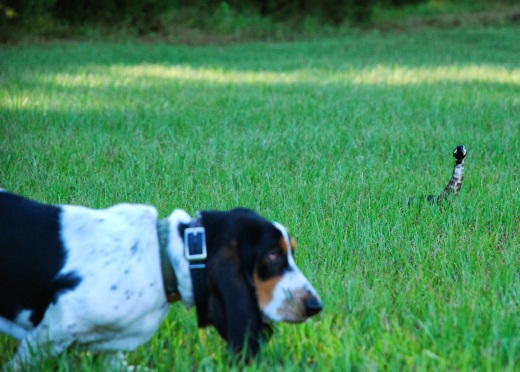 Some dogs just jump and run, usually back to their person where they get lots of praise and love. Some of the dogs were very dramatic though, flipping over and screaming. It was upsetting to watch but I know it could save their life.

After the first shock the dog is encouraged to go back up to the snake to see if it made the connection. None of them would. After the rattle snake, they are taken over to the second snake, the cotton mouth. Many were wary already scared of the cottonmouth, some were still a little curious and they got shocked a second time. 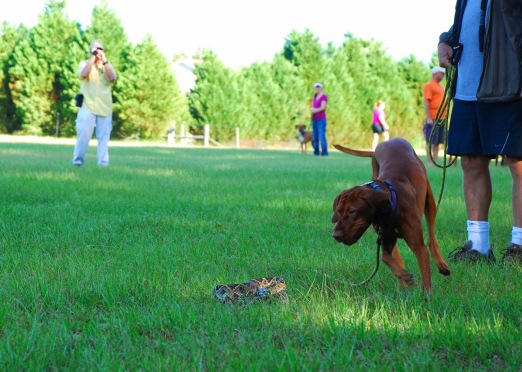 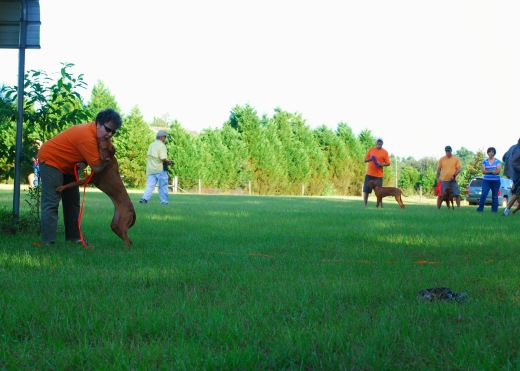 Some of the people had done this before, some with new dogs and some with dogs being re-checked. There were a few first timers like us too.

A few folks said the dogs they had snake proofed before where afraid of anything that had a snake look, like the water hose or a stick. Rhythm has not been jumpy at all though and even pounced on a toy snake that my nephew was playing with the very next day, so I’m hoping she associated the smell more than the look.  We plan to have her re-checked in the spring.